A Tribute to Jimi Hendrix 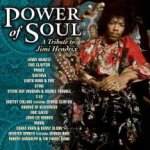 JIMI HENDRIX was a true pioneer of Rock and Roll.  More than thirty year after his death, his amazing talent and his quest for new sounds still leave an impression on all who hear his music and interest in this enigmatic, profoundly talented artist is as strong as ever.  Even though he was on the scene as a solo artist for less than five years, Hendrix is credited with having a profound effect on everyone from George Clinton and Miles Davis to guitarists Stevie Ray Vaughan and Vernon Reid.

Released by DVD UK Ltd on 24 May 2004, ‘Power of Soul – A Tribute to Jimi Hendrix’ is a star-studded tribute CD of newly recorded covers from a plethora of renowned international artists from rock, R&B, blues and funk. From the contemporary R&B stylings of Musiq to the deep country blues of John Lee Hooker, each of these artists bears witness to Hendrix's imprint on their own music.

All but two of the tracks are previously unreleased with the exception of Sting's take on The Wind Cries Mary, which originally came out in 1995, and the late John Lee Hooker's version of Red House, which was on his 1997 album Don't Look Back.

‘Power of Soul’ has been complied by Experience Hendrix.  Formed in 1995 by the family of the musical icon, the company has earned great praise for its restoration of the Hendrix catalogue and efforts to expand the legacy of one of popular music’s greatest artists.

Janie Hendrix, Jimi's half-sister and president and CEO of Experience Hendrix is justifiably proud of the very different direction ‘Power of Soul’ has taken: "A lot of the tribute albums that have come out have concentrated on Jimi's rock side”, she says.  “This is really more of the soul, R&B feel. He was in chitlin-circuit bands and playing with Diana Ross, the Isley Brothers, Little Richard, all them.  So, I'm just trying to shed that light, too."